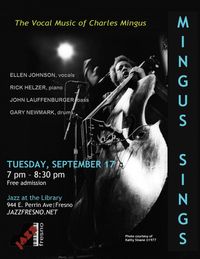 Vocalist and lyricist, Ellen Johnson has been enamored with the music of Charles Mingus for over three decades. Her passion for bass and voice duets, improvised forms of music and complex harmonic and rhythmic music constitute a natural attraction for this innovative musician. Johnson has recorded six Mingus compositions and written original lyrics to four of them including; “Nostalgia In Times Square,” “Peggy’s Blue Skylight,” “Noddin Ya Head Blues” and “Slippers” with permission of Sue Mingus and Jazz Workshop, Inc. Her version of “Peggy’s Blue Skylight” on her debut CD, Too Good To Title, featured alto saxophonist and frequent Mingus collaborator, Charles McPherson. On These Days, Ellen recorded with her friend and mentor, jazz vocalist, Sheila Jordan, whose legendary bass and voice duets began with Charles Mingus. Ellen has performed Mingus compositions in concert, club and other venues and shares her lyrics with other vocalists to sing. Aside from performing Mingus’s vocal songs with lyrics, Ellen uses her voice as another instrument in other Mingus compositions.  Ellen is especially excited to share this program with her long time musical collaborator and friend, pianist Rick Helzer who has contributed arrangements to many of these songs. They recorded two Mingus compositions together on her debut recording, Too Good To Title.